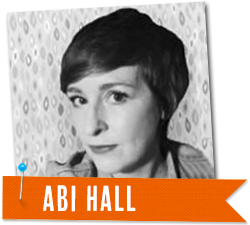 If the New Year will bring with it a new baby—a grandchild, niece or nephew, or maybe your very own tyke—then you’ll want to get to know Moda designer Abi Hall. Abi, who currently hails from Ireland, is debuting ABC Menagerie, a line featuring some of the most whimsical and kid-friendly critters around. 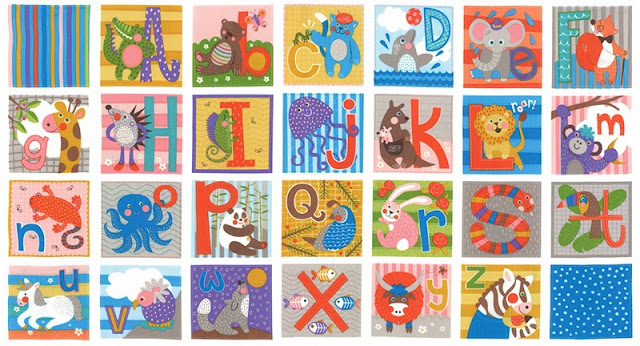 Abi may be especially attuned to youngsters because she started her art career at a young age. “I did literally draw on the walls as a child, most notably on my grandmother’s brand new wallpaper when I was two!” she says. “I haven’t always followed a creative path, but since being made redundant [that’s ‘laid off’ in American-speak] from a job in interior design in 2011, I’ve worked full time as an illustrator and designer.” 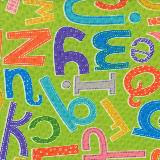 Abi’s life has taken another turn in recent years: she and her husband moved to a small town on the south coast of Ireland. Seeing the sun come up as she walks the beach each morning fuels her creativity. “I find going on long walks is extremely inspiring and usually the part of the day where I come up with my best ideas,” says Abi. “I don’t necessarily draw directly on nature’s imagery for my designs, but the changing colors and shapes that I see definitely influence my work.”
While she misses some of the variety and conveniences of big city life, she enjoys the laid-back vibe of her new hometown. “Most of the local businesses close for an hour at lunchtime, which I still find amazing,” she says. “We also now have a lovely house with a big garden and an adorable miniature schnauzer called Pip, so there have been a lot of benefits to moving out of the city.”
When she’s not busy with other design projects, including stationary, packaging, housewares, crafting supplies, and temporary tattoos, Abi’s hoping that her more easygoing pace of life will provide her with time to sew. “My mum used to make patchwork quilts, entirely by hand, when I was a child and I would sew a few squares of fabric together to make shifts for my dolls,” she says. “I recently received samples from Moda of my fabric and decided I’m going to make a small quilt. It will be a challenge, no doubt, but I’m going to use my grandmother’s old sewing machine and am getting lots of advice from my mum, so it’s going to be really lovely to work on a project that has such a link back to my past and to my family.”
Join Abi in connecting to her family through quilting and stitch something for yours: you’ll be a favorite aunt, grandmother, or best friend if you grace a new family with something stitched from ABC Menagerie! Time to get sewing! 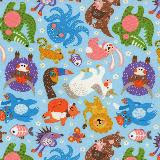