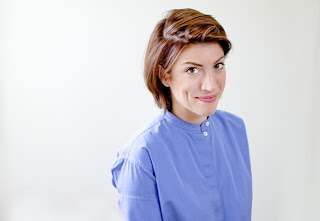 September is National Sewing Month and if there was ever an impassioned stitcher, it’s Mary Fons. Though she’s spent her life cocooned by quilting, it wasn’t always on her radar—in her 20s she worked in Chicago as a writer and performer. But over the last few years she’s gained a new perspective on sewing and quilting and she’s passionate about sharing that with other young women.
“Sometimes I think getting women in their 20s to sit down and make a quilt is an exercise in frustration,” she says with a laugh. “There are always exceptions, but I maintain that we largely begin quilting in our 30s, when we finally stop and reflect on all the crazy things we did in our 20s, when we were busy figuring out who we are.” She describes quilting as meditative, creative, and relaxing. “I wasn’t ready to meditate in my 20s,” she says. “Now I like to sit down with a glass of wine and do some piecing—that sounds like a really nice Friday night to me.”
While Mary says she’s reached a calmer phase of life, you’d hardly know it by her schedule. In a recent week she traveled from her Chicago home to Iowa twice, once to record the upcoming season of Fons and Porter’s Love of Quilting—since Liz Porter’s retirement three years ago, Mary’s co-hosted with her mom, Marianne Fons—and once for photo shoots for Quilty, the magazine she edits that complements her online quilting show of the same name. Then it was on to the New England Quilt Festival, where she participated in a panel on the future of quilting.
That panel led her to reflect on the reasons why her contemporaries quilt.

“I think quilting fits at that intersection of DIY culture—the interest in buying local, slow food, sustainability—the values are similar,” she says. “Making things with your own hands, doing something that doesn’t involve a computer screen—quilting comes from that same part of us that wants to eat the vegetables we grow ourselves.”
Mary notes that her generation had fewer opportunities to learn to sew in school, where home economics classes were often replaced by keyboarding. This familiarity with computers led Mary to conceive of her online show—she knew that beginners would gravitate toward YouTube to learn to make a quilt, but in Spring of 2010 she couldn’t find an engaging series that spoke to her generation. With the help of sponsors, including Moda, she’s created a series that helps new quilters with topics ranging from the basics of presserfeet, needles, and seam rippers to quilt labels and selling quilts.
“Our shows are strong on content and instructions, but are funny and fun to watch,” she says. The magazine follows the same format and next year will go from two issues to six issues annually.
Though Mary’s speaks most directly to new, young stitchers, she feels a strong connection to quilters of the past. “The American quilt is an important artifact for our country,” she says. “The women of the 1800s who made quilts didn’t have to make their quilts beautiful, but they did. They were designers and engineers, and as soon as you take up quilting you’re a part of that legacy. I find quilting inspires extraordinary feelings of pride and patriotism. It’s an American art form, like baseball and apple pie.”
Tagged:
magazine, Mary Fons, national sewing month, Quilty