Written by:
lalexander
Published:
Jul 28 2011 - 12:00
Let's give a big welcome to one of the newest members of the moda sales team.
Sonja Mann 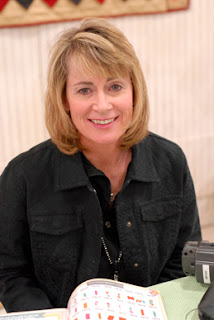 Where did you grow up?
I was born and grew up in Salt Lake City, Utah.
How many years have you been in the industry?
My whole life.  When you live in Utah, "the quilting capitol of the world", you begin to learn about sewing and quilting from birth :)  I love doing hand applique.
Favorite past time / hobbies?


I was a "tomboy" growing up.  I loved all sports and played anything and everything.  I especially loved to play a game called "Snooker" which is played on an extra large pool table.  Also, ping pong and marbles were favorites.  I had a huge marble collection that was the envy of all the boys in the neighborhood.  When I was 12 years old "tennis" became my sport of choice and I played in high school, and college.  I loved life on the tennis court.  When my two daughters turned three years old I taught them to play.  All three of us (my daughters and I) won a Utah State High School Championship Tennis title.  Sports and sewing were very important to all of us and we share these interests to this day.
Tell a funny story about being on the road... The first time I went on the road as a sales representative I went to Albuquerque, New Mexico, from Tempe, Arizona (where I live).  I planned my trip for ten days.  After about five days I did laundry at the hotel and hung everything up to dry in the closet.  I checked out of the hotel and drove about three or four hours to Farmington, New Mexico.  Once I checked into the hotel and was unpacking my suitcase, I realized all my clothes were hanging in the closet in Albuquerque.   My Super 8 Motel in Farmington, NM, was right next to Walmart so I went on my first ever "Walmart (clothes) Shopping Spree".  Let me tell you, I looked pretty "spiffy" the rest of the trip.  My "real" clothes arrived by mail in Tempe, AZ about a week later.
What did you want to be when you were 12 years old?
I was obsessed with tennis and wanted to be Chris Evert.
What is your favorite childhood memory?
My favorite memory was when I turned six years old, my Dad gave me my own "5 Star" baseball mitt.  It is my greatest treasure to this day.  I was so tiny in stature at that age, and my hand was so small that the mitt is about the size of a large softball.  My brothers had not been born at that time so my Dad would play catch with me in the back yard.  He would compliment me on how I could throw the ball "just like a guy". I was so proud! 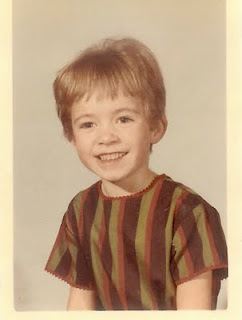 Tell us about another job you had...I started working for Southwest Airlines on August 30, 2001, as a reservation agent.  After two weeks of training, my first day to take calls by myself was on September 11, 2011.  It was in the morning and I answered the phone and a man said, "Ma'am do you know what's going on in the world today?"  I said, "No what?"  He then told me a plane had just flown into the World Trade Center".  After that moment the world was "chaos" at Southwest Airlines.

If you were a quilt block, what one would you be & why?
Snail's Trail, because I'm always following a trail from one quilt store to another.
What was the best thing before sliced bread?
The Lawrence Welk Show.  My grandparents would let us stay over on Saturday night and they would cut up sliced apples and we would all watch the show . . . . those were the good old days.
What would be the name of three chapters in your auto-biography?
Tomboy, Tennis Player/Mom, MODA Sales Rep
How would you describe your job to a 5 year old?
I meet nice people (especially alot of nice Grandma's) and I show
them fabric that they love to pet!
If you were written about in the newspaper, the headline would read...
"Sonja Mann Shines For Tennis Team" 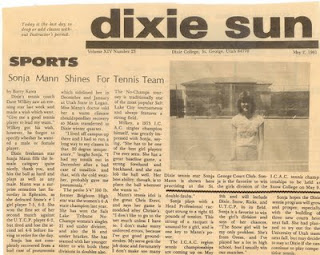 Tell us something about you that most people don't know...When I was born my legs were severely turned inward and when I began to walk I would stumble over my feet and immediately fall down.   Before I started school (at 4 years old), my parents found a Doctor that knew the problem.  My femur bones (the top bones in my legs) were twisted, so he cut the bones in half and pinned and wired them back together.  I am eternally grateful to my parents, because without them being persistent to find the problem, my life would not be as wonderful as it has been. Because I was small in stature, all my clothes were "home-made" as we called it.  My sewing skills have continued to be benficial to this day even though I do not have much time to actually do them all.
Back then I would have never dreamt to one day be a salesperson in the sewing and textile industry.
Name three things you never leave home without...
I-Phone, GPS, Purse
My vice in life...
Sleeping In (which is a rarity)
My passion is...
It was raising my two daughters, now it is starting this amazing career
with all of you and Moda fabrics/United Notions.
Boxers or briefs?
Can't go there!
My motto is...
"The rich stay rich by living poor, the poor stay poor by living rich"
You just drove your car through the garage door. What would you say to your spouse / significant other, to convince them that this is good news?
"Whoopee, time for a NEW van and a NEW house!"
Me & my: senior prom / wedding / bad hair cut / proud moment /
school photo, etc.  Explain!
Here is a picture of my best friend and sister Marilee.  She and I won the Utah State High School Doubles Championship when I was a Senior and she was a Sophomore. 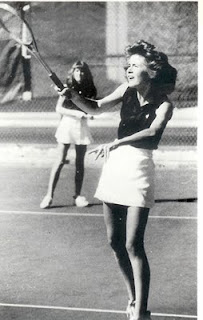 If you were not a sales rep, what else would you do?
Learn to play golf.